However, the SC bench comprising Justices A M Khanwilkar and S K Kaul rejected the plea for imposing culpable homicide not amounting murder charge under Section 304A of IPC on Sidhu. The cricketer-turned politician tweeted, “Will submit to the majesty of law,” says Sidhu in a tweet.

Will submit to the majesty of law ….

SC Judge Sanjay Kishan Kaul said, “We have allowed review application on the issue of sentence. In addition to fine imposed, we impose a sentence of imprisonment of one year to be undergone by respondent 1 (Sidhu).”  The Supreme Court had earlier reserved the review petition in a three-decade-old road rage case that was filed by the family of the victim.

The case under which Navjot Singh Sindhu has been given 1 year jail term is based on a road rage incident that took place on 27th December 1988. As per reports, Sidhu along with his associate Rupinder Singh Sandhu had hit a 65-year-old man named Gurnam Singh on his head following a verbal altercation. Gurnam Singh had later on died due to injuries.

The victim’s family had filed a case against Sidhu, which went through session court, high court and then the Supreme Court. The Patiala Sessions Court had acquitted Sidhu and his associate on September 22, 1999 due to a lack of evidence in the case and giving them the benefit of the doubt.

The ruling was challenged by the victim’s families before the Punjab and Haryana high court, which convicted and sentenced Sidhu and his associate Sandhu to 3 years jail term and a fine of Rs 1 lakh each. Sidhu filed an appeal before the Supreme Court challenging the ruling.

The Supreme Court had held Sidhu guilty in 2018 and charged him for the offence of “voluntarily causing hurt”. The court imposed Rs 1000 fine on Sidhu and his associate for the offence but did not sentence him to jail.  The apex court acquitted him on the culpable homicide charges. 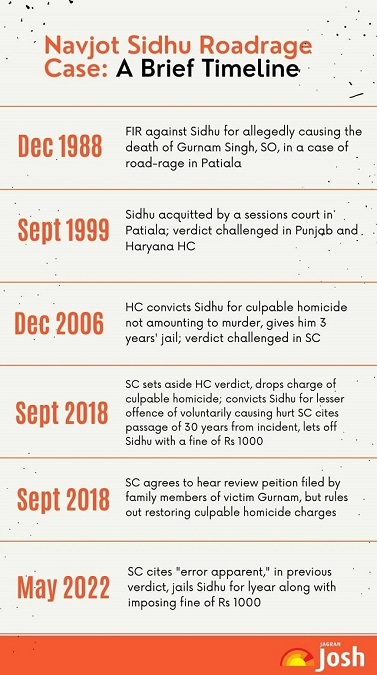 READ ALSO: What is Religious Worship Act 1991? Why is it in News? – Know Key Clauses/ Penalty